Relevant NPCs​
I've created a number of NPCs, many of whom are adoptable (you can cross reference those in Looking For). 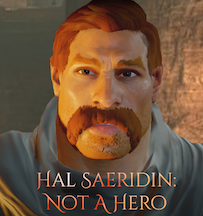 Image by Bioware, Tweaked by Yours Truly

Haldor Augusten Saeridin III
Nickname: Hal or Sonny
Race: Surface Dwarf
Location: Kirkwall
Affiliations: Hanamene, Varric, Saeridin & Son Building Company, Dwarven Merchants' Guild
Mini Bio: A surface dwarf and Master Builder who inherited the family company. He was the son of surface dwarves Siena and another Master Builder, now deceased, named Haldor Saeridin Jr.. Hal's grandfather, the original Haldor, was from Orzammar - in his later years people called him Grampy Saeridin, or Grumpy behind his back.
Appearance: Sienna red hair and a twitchy moustache. In his forties.
Personality: Cantankerous. Secretly a softie. Survivalist i.e. will totally bail in dangerous situations. Head for business. Used to enjoy pranks in his youth. Doesn't like to curse outright (e.g. feck is a favourite alternative of his).
Text: ECCEAE
Use: Feel free to "assume" him in threads if dialogue calls for it/to move things along. Just keep the above notes in mind.

Ser Luther Wildes
Race: Human
Age: Flexible on this, presumably older than Hana though.
Location: Kirkwall
Affiliations: Hanamene, Magnus, Templar Order
Mini Bio: Demoted from Knight-Tracker to Instructor at the Templar Order in Kirkwall, after failing to kill a maleficar. The Thornecroft siblings intervened and saved his life, Hana killing the mage in question. The trio made it to Kirkwall together. Ser Luther spends a lot of time training the recruits in the Gallows and was once a favourite sparring partner of Hana's.
Appearance: Fair-haired.
Personality: Dutiful. Humble. Obliging. Took his demotion honourably. Actually enjoys being an instructor now.
Text: DAD333
Use: Feel free to "assume" him in threads if dialogue calls for it/to move things along. Just keep the above notes in mind. You can also use Ser Luther without Hana even present, if you need a misc. templar around for some reason! Beat him up even, just don't kill him lol.

Sister Maye
Nickname: She and Hana call one another pixie or nixie, depending on if if they're being sweet or mischievous.
Location: Kirkwall
Race: Human
Born: Free Marches, wherever you like therein.
Affiliations: Hanamene, Kirkwall Chantry
Occupation: (current) Chantry Sister; (formally) Bard.
Mini Bio: One of the first people to befriend Hana in Kirkwall. She often knows the most valuable and/or most entertaining gossip related to Kirkwall's Chantry and Circle. Few know anything about her life prior to her joining the Chantry, because she's sparing with the details. Only with those closest to her will she talk about her past romantic dalliances, and it's implied she's not nearly as innocent as she looks. She's been known to leverage her unassuming appearance, when needed.
Appearance: Long red hair. Some freckles on the bridge of her nose. Petite and looks much younger than she is.
Personality: Devout Andrastian. Despite her vivacious personality, which she artfully plays down at the drop of a hat when she needs to, she has moments of incredible profundity. She has a big heart, but she can be saucy. Teasing and impish, but subtle about it. An incorrigible flirt when senior Chantry officials aren't around to scold her for it. Romantic and looks for opportunities to play matchmaker. Thinks Chantry and Circle officials should be allowed to marry, or at least not hide or seek a sanction for their affairs.
Text: B2849A (or change it, if you want)
Use: Feel free to "assume" her in threads if dialogue calls for it/to move things along. Just keep the above notes in mind. You can also use Sister Maye without Hana even present, if you need a misc. Chantry Sister around for some reason but be careful not to make her mad, she's tougher than she looks.
Builder Garvey
Location: Hinterlands region.
Mini Bio: An associate of Hal Saeridin's in Ferelden.
Text: None chosen yet.
Use: He's static (i.e. immovable) from the Hinterlands area. He will be the foreman at the reconstruction cite of Thornecroft Cottage, specifically - but it's feasible he'd be seen in Redcliffe proper from time to time. Just check with me if you want to use him, since I need to make sure he's actually available and not involved in a thread with Hana during her trips back home.

Ser Merritt Warring (or a direct descendent of his)
Location: Hinterlands; holds land between Redcliffe and Lothering
Age: Would need to be at least 10 years older than Hana (i.e. born sometime around or before 9:1)
Race: Human
Born: Hinterlands; Ferelden
Affiliations: Redcliffe Arling; House Guerrin; Thornecroft family.
Occupation: Knight of Redcliffe
Mini-Bio: Veteran of the Fifth Blight. His lands neighboured those of Thornecroft Cottage. He took an interest in Hanamene's upbringing, likely feeling sorry for her that her father was rarely around and having not known her mother. He trained her to ride horses, quite well in fact and furthered her ability with the sword and shield. It's likely that Hanamene's grandmother tried to ingratiate their family with his, in an effort to regain some form of status.
Appearance: Tall and hale. The rest is up to you.
Personality: A mentor and a proud Fereldan. The rest is up to you.
Text: 406069 (or change it, if you want)
Use: Feel free to "assume" him to move narratives along. Totally fine if your character has an affiliation, past or present, with him and/or his family as well.

Mason Thornecroft
Location: Hinterlands; Ferelden
Age: Past his prime.
Race: Human
Affiliations: Redcliffe Arling; House Guerrin
Mini-Bio: Master Builder of some renown in Ferelden. Built and/or repaired a number of structures, often Chantries. He was killed during the Fifth Blight. Vassal of House Guerrin.
Appearance: Bearded. Shrewd eyes. Kind smile.
Personality: Hard-working. Pious (Andrastian). Patient. Forgiving.
Text: A20B30
Use: Deceased. He only shows up in Stories of the Past.

Estella Thornecroft (née Augur)
Location: Hinterlands; Ferelden (previously Tevinter)
Age: Past her prime, though hardly looked it.
Race: Human
Mini-Bio: Hanamene and Magnus' grandmother, Ser Graeven Thornecroft's mother, Mason Thornecroft's wife, and the daughter of disgraced magister Magnus Augur. She was once of the Altus class in Tevinter, but became an apostate-in-hiding after coming to Ferelden. Estella had a secret business selling enchantments out of Thornecroft Cottage. She was killed during the Fifth Blight.
Appearance: Dark-haired and exotic by Ferelden standards.
Personality: Aloof. Haughty. Over-protective. Judgemental. Resilient. Methodical. Fastidious.
Text: 540099
Use: Deceased. She only shows up in Stories of the Past. Although I might un-kill her, so to speak, and have her show up amongst the Venatori using the assumed name Eluvia (effectively making her a killable NPC villain).
Influential Nobles:

Lord Northesker
Mini Bio: Old money nobility in the Free Marcher region, has their hands in a number of cookie jars from politics to trade. Has an entitled son named Wigstan. In 9:35, commissioned Saeridin & Son Building Company to build an underground vault for him beneath his estate (just outside of Kirkwall) - but progress has halted.
Text Colour: None chosen yet.
Use: Feel free to rp him or make reference to/use of his family if it serves to further your own plots. Note that you would not be able to kill him without massive consequences, given that he's a nobleman of influence throughout the Free Marches - not just Kirkwall.

Anson Guile
Mini Bio: Older brother of Earic. The Guile Family holds political clout in Kirkwall, specifically. Anson is particularly revolted by Fereldans in general, referring to them all as mongrels. Though he runs in Wigstan's little crew, he serves as Wigs' rival for authority over the others at times.
Text Colour: ED1919

Heath Dunview
Mini Bio: The lothario of the bunch. He pesters women regardless of their nationality. In truth, he's not as bad as the rest. His family are rich, Free Marcher horse breeders - they own Dunview Estates, an impressive stable and race track found just outside of Kirkwall as well.
Text Colour: 724B93

Declan Hyll
Mini Bio: The indifferent member of the crew. His family has strong connections to the Chantry, thus he's only ever interested in the crew's shenanigans if they could be of potential Chantry concern. His family is highly matriarchal, and he's related to a number of Free Marcher Chantryfolk.
Text Colour: A8E619

Use of Troublesome Lordlings: You can use all or any of the troublesome lordlings listed above or even make reference to, or expand on, their noble families if you like. Note that if you kill any of them, there would be heavy consequences given how much influence their respective families have. The city guard would be on you like white on rice. Also, let me know if you make any big changes with them so I can update this.
If you want to adopt and redeem any of these jerks, feel free to do so too. Just, again, let me know.
Somewhat specific to the DA:I timelines, but we can plan ahead if you want to take part.

Hanamene will eventually come to lead a small cavalry unit, never more than 10 horsemen, under this name. Originating out of the Redcliffe and Hinterlands region, they'd be based at a cantonment between Redcliffe and Lothering (Hana's family land repurposed for this reason). Though aggressive riders they'd remain a small force, avoiding large-scale combat when possible, and specialize instead on reconnaissance, tactical or attack-and-flee engagements. These would be veteran, auxiliary/irregular soldiers and horsemen, affiliated with the Arling of Redcliffe in particular.

When the Mage-Templar war spills into the Hinterlands, they would've been doing their part to fight mage or templar alike in favour of defending the commonfolk of the region.

If you've a character with loyalties to either Arl Teagan, the Arling of Redcliffe, or the Hinterlands and want to join in on this mini-plot (which we're letting flourish/develop IC), and want to be part of this - PM me.

Otherwise, the horsemen outside of Hanamene will be a revolving door of NPCs.

Read more about this in its Story Planning thread, if it interests you. Feel free to join the discussion there, too.

Some starter NPC cavalrymen, or riders, for this will be as follows (all of which you can adopt and make your own, if you want - below are just their nicknames*):
* Hanamene's nickname amongst them is "Serjeant" or "Serj".
Last edited: May 3, 2020
Hana: A6ACAF | Hal: ECCEAE
Profile | Thread Tracker | Thornecroft Timelines | NPCs | Looking For | Wiki
Saeridin & Son Building Company | The Drakestone Reserve | Thornecroft Cottage
Avatar by eilidh (CC BY-NC-ND 3.0)
You must log in or register to reply here.
Share: Facebook Twitter Google+ Reddit Pinterest Tumblr WhatsApp Email Link
Top